June 25, 2013
I have been thinking about this race for over a week now.  It was a tough one and I had not expected that.  Not that a 1/2 IM is ever easy, but I felt prepared and ready to race.  I have done this one before and remembered it being amazing.  The swim, bike and run course are scenic and challenging and familiar.  Being familiar with the course, I thought I had it made.  That, it seems, may have been a flaw in my logic.

My two big races this year were Lavaman and St. George 70.3.  Both I had never done before.  They made my stomach churn in anticipation of race day.  Since I had never done them before, I was excited but never set a solid time goal for either. 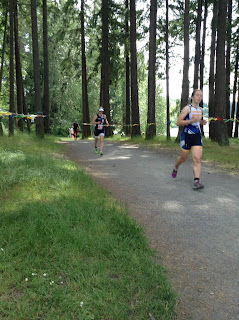 Finishing the first loop of the run.  Looking down and not really happy that I sill have 10kms to go.

I have thought a lot about this race.  I think knowing the course and feeling confident were my achilles heal.

I had no process goals for this event, only a time goal.
I never once thought about what I would do if I was not meeting the goal during the race.  I had no Plan B or milestone goals.

Retirement crossed my mind a few times this week.  Maybe I could kick ass in Olympic Distance and give up the 1/2 IM and IM distance?

I have been in a 'running funk' the past few weeks which contributed to my slow run time.  Feeling slow, sluggish and generally heavy footed on the run.  The thought of going for a run has been blah.

And what about Challenge Penticton?  That is only 9 weeks away.

You see how my mind spirals...

Take aways from this race: