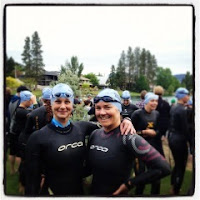 Over a year after I signed up for it, I finally completed the Oliver Half Ironman.  I signed up in early 2011 only to be surprised with a trip to Hawaii and the Hawaii 70.3 in May 2011 for my 40th birthday.  Awe shucks.

2012 has been a potpourri of events with sporadic training.  This has been intentional as my 'off Ironman year'.  No coach, no particular event focus just out there having fun.  My running really fell off the wagon before we left for Spain in March with my back issue.  I only ran a few times in Spain and the distance was no more than 5km each run.  Since returning, my I have been focusing on cycling and started to swim again.  My longest run before the Oliver Half Ironman was 16km.  Regardless, I was really stoked for the race.  I knew my swim would be strong, my bike would be stronger than before and my run would be OK.  And that is pretty much how the day went.

Swim - 2000m
42:44
I felt good in the swim.  My shoulder didn't give me any trouble, even though it had been aggravated by the drive to Oliver from Vancouver.  I started off in the front group and managed to find some feet and hang on.  The swim was much more open than Ironman.  I pretty much had my own space for the whole 2000m.  No kicking or punching.  I felt like I was on track but when I exited the water and headed for wetsuit stripping, I saw that my watch said 42mins.  I should have swam around 36mins.  The water had been a little choppy and it was windy but I didn't think it should have put me 6mins off my usual pace.

T1
6:47
This is the LONGEST T1 I have ever encountered in a race.  After exiting the lake and getting your wetsuit stripped (thank you North Shore Athletics for providing volunteers to do this), there is a 500-600m run/walk/racewalk to transition.  Some people brought shoes down to the beach for this but I just went for it on my bare feet.  No ill effect from this other than it seemed to take forever.

Bike - 93km
3:09:53
This is an AWESOME bike course.  The road is beautifully paved and it feels like most of it is downhill.  Yes, there are 2 short steep hills on the route but you can power over them and then get a free ride for the next few KMs downhill.  The bike is 2 1/2 loops which makes it great for spectators and cheering.  Thank you to everyone from The SAA and The South Delta Tri Club to was out there cheering.  It really made my day.  I felt great on the bike.  Although my longest ride was just over 70km in training, I have been commuting to work and riding more this year.  I really felt like I was in control of the bike and could speed up when needed and pass comfortably.  Nutrition on the bike consisted of 3 Margarita Shot Bloks per hour (1 every 20 minutes) and one 500ml bottle of Gatorade.  I was well hydrated and had to stop on the 2nd lap of the bike for a Port-O-Potty break.

T2
3:16
This was an OK transition.  I should have sat down to put on my shoes to make it faster but insisted on standing up.  Also included trip to the Port-O-Potty before exiting to the run course.

Run - 21.1km
2:22:19
Since my bike had been so positive and resulted in a great time, I was really wondering how my run would go.  Had I worked too hard on the bike to be able to run?  I started off feeling good and saying 'if I just keep running at this pace, I will be OK'.  The first loop of the run felt quite good but the 2nd loop proved to be move challenging.  My right ITB and left hip were starting to make me aware they were not happy.  I started walking every aid station and enjoying the Cola provided on course.  Nice change from the Gatorade.  Nutrition plan for the run was alternate water and a Shot Blok with just Gatorade every aid station.  In the end, I stopped eating the Shot Bloks and switched to just Cola and water.  It did the trick and felt strong as I finished.  Not a PR run by any means but right where I expected to be given my run training.

Overall
6:24:57
This is a 'must do' race.  The swim/bike/run courses are so beautiful and the community is very supportive of the event.  See you next year Oliver Half Iron!