December 19, 2009
The next time someone tells you that Florida is flat and warm, make sure you clarify which area of Florida they are referring to.  Let me tell you, Clermont Florida is NOT FLAT and was NOT WARM today for the Florida Marathon.  Clermont is not just a hilly area of Florida, it is hilly compared to most places.

Last night, Tim and Jamieson went to the opening night of the movie Avatar, leaving me to rest and get to bed early.  I slept really well and woke up at 5:30am when my alarm went off with no problem.  Because Florida is supposed to be warmer than Vancouver (which it is) I packed my Sugoi Brand Champion tri top, running shorts and hot pink Newton Racers for my race.  This morning the temperature was around 12C with high winds.  We actually had the heat on in the car (something we have never had to do on a trip to Florida before).  When we arrived at the race site I did a lap of the track and realized I was going to freeze if I didn't wear a jacket.  Luckily, the National Training Center gear shop had a booth at the Start/Finish line and Tim bought me a new pair of Sugoi arm warmers.  Later on the run I thought about how ironic it was that I had to purchase a product made in Vancouver in Florida.  The arm warmers worked like a charm and were very cute also (black with colourful hearts on them).

My first 21.1kms were GREAT!  I felt good, my feet and calves felt good, my hands were cold and the wind was pretty high but I had a smile on my face.  I had chosen to wear my Fuel Belt since I was not sure what would be available on the course.  Turns out that the course was well stocked (about every 2miles, sometimes closer) with water, Gatorade, GU Gels and GU Chomps.

By the start of the 2nd loop, the sun had come out and it was getting warm.  Not hot but warmer than the first loop.  I would say it got up to about 17C.  I peeled off my arm warmers, took off my Fuel Belt and left them at the track.  As I climbed back up to the main road I could feel that I was falling off my pace.  I had been comfortably doing 5:45-6:00/km until that point.  My stomach started to give me some trouble and within about 8kms I had to make two port-o-potty stops of about 2 minutes each (I will not go into more detail than that, I promise).  After that I was feeling better but had really fallen off my pace and my legs were really starting to feel the hills.  At about the 35km point I was pretty much done and was looking forward to the finish.  The last 1km is all downhill and then 200m around track.  The track was like heaven on my feet and legs but the 3% downhill grade to get there took its toll.  Who knew it would be so tough to run downhill?  Ouch!

I didn't know exactly what my time was until I crossed the finish line.  I had forgotten to turn the Auto Pause off on my Garmin so my watch had stopped during the 2 port-o-potty stops.  As I rounded the track I was very happy to see the 4:24 time with my final finishing time being 4:24:34.  This is a PB for me and I was happy with the time given the course.  I had origionally thought a 4:15 would have been possible until we drove the course yesterday.  Needless to say, I was suprized how hilly it was.

All in all, I am very happy with how this last even of 2009 went for me.  I would recommend this marathon to everyone.  It was very well organize and only had about 400 runners total.  I would guess there were no more than 100 marathon runners.  Most people ran the Half Marathon.  I would also recommend wearing an iPod.  The first loop of the course was busy but not crowded.  The 2nd loop was lonely and I was glad to have my tunes with me to keep me company.  Most of the event is run on a paved bike trail so no need to worry about traffic.  Volunteers were great and well placed along the course.

Oh, and the best part was that I placed 2nd in my age group and received a plaque!  I was initally awared first in my age group (OK, it was because there was no one else running in my age group) but then awarded 2nd when another runner was accidentally placed in the wrong category.  Guess it doesn't pay to hand around the race site after you get your award.  LOL.

Because we are still in Florida, I haven't yet downloaded any camera photos.  Here are two from today's race taken on Tim's phone.  Stay tuned for more Disney, Universal Studios and vacation fun in the next few weeks. 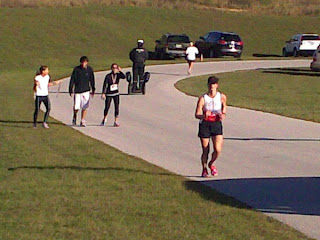 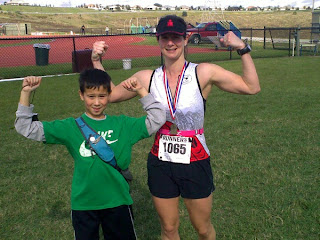 Michael (Mickdo100) said…
A great marathon report and a great run. That really does sound tough when you thought it might be flat. I know myself that that running downhill can be so hard when your legs are tired.

Sara Cox Landolt said…
Wow, congratulations on a PB and on getting 2nd in your AG!!! Super! I love your SUGOI gear & loved reading about the race site/course. I definitely agree a smaller event marathon can be lonely, but I'm a caboose runner, so it's pretty much silent! Good job!
December 19, 2009 at 1:06 PM

BEADLE said…
Way to go Erin ! You did so well ! Congratulations !