November 20, 2009
If you have followed my blog for a while, you will know that I am a very big advocate of having goals. There is no way that I could have trained a year for Ironman Canada without having milestone goals along the way.
In 2009 I raced 2 sprint triathlons (Delta Tri and North Shore Tri), 2 Half Ironman (Victoria and Vancouver), the big show at IMC 2009, one 5km race (Las Vegas), a Half Marathon (New Balance Fall Classic) and to wrap it all up, a Marathon (Florida Marathon). It has been a fantastic year of training, racing and personal achievements.
Many triathlete and runner blogs I follow are now starting to make public their races and goals for 2010. Which got me thinking about my 2010 goals. At this time last year, I had my race schedule planned and was two months in to my IMC training plan.

So what do I have on my race calendar for 2010? Well....nothing.
2010 in my house is known as "The Year Of Tim". My always accommodating and supportive husband is having a milestone birthday in 2010 and declared it 'his year'. How could I argue with that? After all, he did spend ALL of 2009 working his life around my crazy training schedule and big racing goals. Tim hasn't finalized his goals yet but there is a lot of talk about marathons, paddling and travel. He has signed up for the Ride to Conquer Cancer. 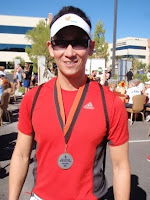 For 2010, I am going to keep swimming, biking and running. Perhaps do a few running races, sprint triathlons and possibly a Half Ironman.

Ultimately, my main goal for 2010 to show Tim the same level of support for his goals that he showed me this year. :-)

Big Daddy Diesel said…
And being an Sherpa is just as rewarding as being the athelete.

LostTrailRunner said…
Took your last podcast on my long run, helped me get through the workout.

Drusy said…
I remember you talked about the Year of Erin on RRT! What a strange way to manage your goals. I'm not sure I could handle a whole YEAR! But I guess your goals are much longer term than mine. Good luck with the year of gracious compromise!
November 25, 2009 at 12:50 PM