September 06, 2009
I can't believe that it has already been a week since I completed Ironman Canada 2009. Today I slept in, made a hot breakfast and read a magazine. Such a foreign concept when you consider my life for the past year.
I promised a long post so here it goes...

Thursday August 27, 2009
This was the first day we could pick our packages so I headed down to the race site with Colin. The line was LONG and the weather was getting warmer. After being in line for about 1/2 hour, we were told that the line was being split into 2. Racers with race numbers 1550 and under and racers with 1551 and higher. Of course the 1550 and lower was a much shorter line and my number was 2396. I was happy that I brought a bottle of water and a snack with me. About 2 hours later I was in the tent and picking up my package. The process was to show your ID (drivers licence or passport), get handed a waiver, read the waiver, sign the waiver, hand in your waiver, be weighed (I was 134lbs), collect your swim cap and race package with transition bags and leave the tent. On the way out of the tent, there was a photo table set up where you could pre-purchase your race photos. Being my first IM, I bought a $100 package that included all my photos and a picture frame. There were other options that included a shadow box that were $300 and up. There is nothing inexpensive about Ironman. Inside the race package, there was a coupon for FREE Prepair Crocs. 200 pairs a day were being given away. The line up was crazy long and by the time I had received my race package, they were out for the day. From there, we went back the house we rented on Skaha Lake (I highly recommend this rental). This house is on the bike and run course.

Friday August 28, 2009
We headed back to the IMC expo on Friday to try again to get my FREE Crocs. 2 hours later in a long hot line up I was told they were out of my size! I still stayed in line to see if I could fit into a sz.7. I am usually a sz. 8. I managed to squeeze my feet into the 7 and left with a nice pair of pink and grey Prepair Crocs. Funny thing is, I haven't been able to get my still swollen feet into them after the race. LOL. Also, standing in the hot sun for 2 hours waiting for free stuff was probably not the smart move a few days before Ironman. Crocs Prepair are about $40CDN. I should have just rested and bought a pair in my size later. Live and learn.
Friday night there was a carbo loading dinner followed by a mandatory pre-race meeting. I was warned that the food was not very good and the meeting would be long and boring. However, I wanted to soak up all the IM atmosphere and went. I highly recommend going. The food was average but the company was excellent. I met other racers who were veteran Ironman racers and others that were rookies like me. The meeting information was relatively dry but was informative. Better to be in the know than get DQ'd for not knowing the rules.

Saturday August 29, 2009
This was the day to put our bikes in transition. There were two times available 9-11:30am or 1-3:30pm. I had not packed my transition bags yet so I opted for the afternoon time. This also gave me a chance to do a final once over on my bike. The week before Ironman I had my bike check out and given a tune up at my local bike shop. When I arrived in Penticton, I found that my left shifter (two chain rings in the front) was not working! I had to pull the shift cable to change my gears. Big issue. Thank God one of our house mates is the SAA president AND a bike mechanic. He quickly figured out what the issue was, removed the cable and housing, went down to the Bike Barn, bought the parts, and then installed them for me. Disaster averted!

After packing, checking and double checking my transition bags and my special needs bags, we were off to put my bike in transition. Because no one except racers is allowed in transition, Tim dropped me off at the transition entrance with my bike bags. Immediately, a volunteer offered to help me out by carrying my bags and directing me to my bike spot. In Ironman, you are assigned a bike spot so there is no concern about selecting a spot to rack your bike. The volunteer then gave me a briefing of the way transition will work on race day. I dropped off my bags and met Tim and Jamieson, stopped by Tim Hortons for lunch and went back to the house to relax. Amazingly enough I was calm-ish and ready to race the next day. 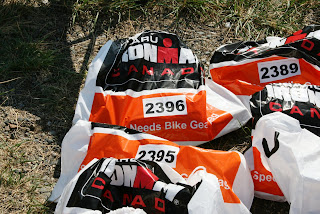 Here is what I put in my transition bag and my special needs bags....


Special Needs Bike bag (120kms in to the bike)

Once back at the house, all I need to do was get a good night sleep and set the alarm for 4:30am Sunday morning.

Unknown said…
What a brilliant idea! Baby powder! Love that you laid out your transition bags for us....
...but now i'm anxiously awaiting the remainder of the report:)
September 6, 2009 at 9:47 PM

I just got my Prepair Crocs and after a 17 mile run, my crocs are tight from my swollen feet. So I am glad to know that my feet aren't the only ones having a problem fitting in them. Wearing socks helped a little bit.
September 7, 2009 at 4:41 PM

Rae! said…
Nice report. Couple questions
In the 70.3 races do you have to pack your transition bags the same?? And as I get closer to the race, will they tell me what and when to pack??
May is my first ever Half Ironman. I like the podcast pre ironman, I like how you kinda explained you training schedule.I am having a hard time getting through the mental part. How did you over come that part??
September 7, 2009 at 8:22 PM

Big Daddy Diesel said…
I agree with Steph, brillant idea on the powder, congrats on your race.
September 8, 2009 at 6:29 AM

Unknown said…
So glad you were able to relax and not feel anxious the night before the race. That is awesome! Also, I love that you told us what you put in the transition bags. I think that will help give guidence to tons of nervous pre-Ironman competitors.

Sandy said…
obviously, catching up to you as I just found your podcast. I'm sure that you answer this somewhere - but you did the bike without bike shorts?
November 19, 2009 at 9:07 AM