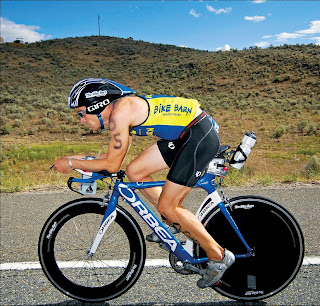 With my decision to do IMC in 2009 came the decision whether to stick with my awesome Specialized Tarmac road bike or make the move to an official 'triathlon bike'. After deciding that my road bike was going to work just fine, I was alterted to a resonalbly priced tri bike for sale the TriBC classified. I have never been one to buy used so I was sceptical. On closer look, I was very intriqued. This was not just some age grouper selling well used tri bike this was Jonathan Caron selling his Orbea Ora. The Jonathan Caron who finished 2nd at IMC in 2007 and who is featured in the July/August 2008 edition of Triathlon Canada Magazine is selling his bike on the TriBC classfieds? Yes it was true!

After a few days of e-mails I was hooked. I headed down to Speed Theory to see if they had the same bike in the same size to make sure it fit. Victory! The size Jonathan was selling fit. A few more e-mails and the arrangments were made.

Jonathan is living in Penticton currently training for IMC 2008 so getting the bike from Penticton to Vancouver was going to be a bit of challenge. I wanted the bike asap and I am not going to Penticton until the IM weekend at the end of August. Luckily, the crazy people that I am friends with are also doing IMC 2008 and were heading up to Penticton for a training session this weekend! Now I only have to wait until tomorrow to see my new bike.

On some other positive notes, I came 1st in my age group for the 1.5km swim with VOWSA and I took 5 minutes off my bike time at The Diva's Sprint triathlon last weekend.

I had planned to go to Bellingham for a 2.5km swim race at Lake Padden, WA but was defeated by the border line up on this August long weekend. I arrived at the truck border at 7am and was still not even close by the time 8am rolled around. With the race starting at 9am, I was not going to make it. I cut my losses and turned around and returned home.

All in all, it was a great training weekend though. 60 minute run on Friday night, 90 minute bike yesterday and a 110 minute run this morning. All with my new Garmin 405 GPS. So much data! Love it!

BEADLE said…
Nice Extreme Bike ! Now you should think about buying one of these sweet dutch bikes for peddling around the neighbourhood.